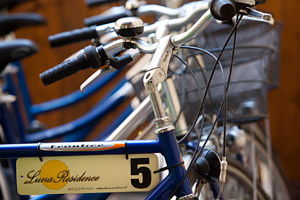 The tourist who, in his journey, is looking for the breath of the agricultural padano world, will be able to find it in the province of Cremona. The area is totally flat, so you can enjoy the pleasure of a bike ride: wellness, tourism and improvement of the environment, for a "slow and sustainable" tourism a network of cycle travels around the whole of cremonese territory. The project "a little bicycle" involves the town of Cremona and a system of dedicated services to the tourists on bicycle.

Mountain bike trails in the province of Cremona up in Casalmaggiore are suitable for all, professionals and not, to families and cyclists. The itineraries travel on secondary roads, embankments, river lanes campestri, between patrician villas, farmhouses, farms, crops typical in a perfect harmony between landscapes and architectures. To appreciate river Po environment you can go through a series of very interesting slopes: for example, the Bike Path of the flood plain of the Po, a veritable greenway that, along the banks of the river, from Cremona to Casalmaggiore.

PO02 - FROM CREMONA TO CASALMAGGIORE


PO02 - FROM CREMONA TO CASALMAGGIORE 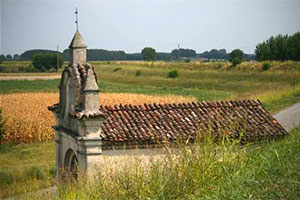 PO03 - THROUGH OGLIO AND PO RIVERS


PO03 - THROUGH OGLIO AND PO RIVERS 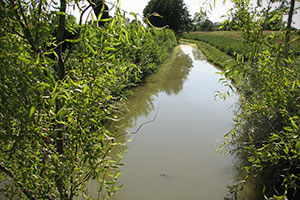 MN01 - BETWEEN MANTOVA AND PO RIVER


MN01 - BETWEEN MANTOVA AND PO RIVER 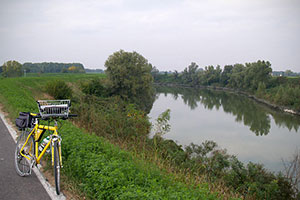 The long route winds up the agricultural area of the Mantova, where the rural elements predominate on the whole landscape. The path offers an interesting connection between the cycling of the Po, and of the Mincio River. Pay attention to traffic at Scardova Palace and Cesole; water supply only in inhabited areas.. 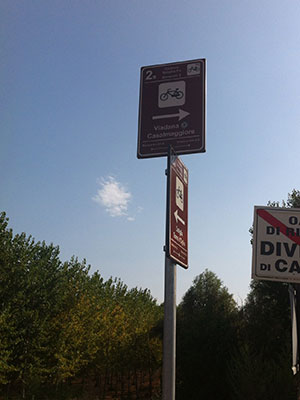 The term EuroVelo identifies a group of cycling paths that pass through the whole of Europe. In recent years, in the context of the ECF (European Cyclists' Federation), a special working group to which they belong several european members drew up a proposal for network of cycle routes (European Cycle Route Network) covering the whole of Europe geographically understanding to the west of the meridian of Moscow. In Italy, FIAB adheres to the federation and collaborates with the project through the implementation of the network BicItalia. After several meetings and discussions in the summer of 1997 published the first map that secures, to large lines, twelve itineraries. Eurovelo 8 comprises the itinerary of the Mediterranean, therefore comprises the area of the lower Po valley, in particular with the following routes:

Viadana - Cavallara on your right 16.3 km

THE TYRRHENIAN CYCLEWAY AND THE UNESCO ROUTE


THE TYRRHENIAN CYCLEWAY AND THE UNESCO ROUTE

It connects Verona to the Tyrrhenian Sea; from Verona, going through the Po Valley to Mantova and there the UNESCO route throughout Sabbioneta, the Renaissance pearl founded by Vespasiano Gonzaga. The practicability is lesser in Casalmaggiore, tipical town located along the Po river embankment. During the long but easy route ( the streets are quiet and flat) there are different towns, each one with its excellences:Buscoldo with the late-baroque parish church; Torre d’ Oglio, the pontoon bridge and the oratory of Correggioli; San Matteo delle Chiaviche (28km, in the municipality of Viadana) with the golena area, which name comes from the pumping station that takes the water from the Oglio river to irrigate and fertilize the surrounding countryside; Commessaggio with the “Torazzo” built on commission of Vespasiano Gonzaga is the place where tasting the very sweet melons, produced in quanties. Then going through the Vitelliana street, the ancient roman military street, built on commission of the proconsul Vitellio, one can see the “San Remigio” hermitage, built in the XVII century for the pilgrims who went to Rome. Finally, while the details get lost and the houses look a mix of warm colors, one arrive, quite suddenly, to Sabbioneta (built between the year 1556 and 1591 on commission of Vespasiano Gonzaga), “the little Athene” of the Reinaissance, definited “The ideal city”;one arrive directly to Ducale place in all its beauty with the Ducal Palace, the symbol of its greatness. Then, one arrive to Casalmaggiore (it’s about 9km from Sabbioneta) one of the few towns bathed by the water of the big Po river

Click the BOOKING ONLINE button. Enter your arrival and departure dates, in addition to the 1st guest set the the EXTRA BEDS , click Check availability to get the available room list and the price in the selected period.  The price is for 1 person, each guest over the first needs to set the Extra Beds.