From Saturday, January 20th, 2018 it will be open the 13th edition of Pig Foot Fair (Festa dal pipèn), a cooking review entirely dedicated to his majesty the Pig, and in particular to preparation of a very particular part of it, the boiled foot, an integral part of the culinary tradition of our territory, between two rivers Oglio e Po.

We all know that the pig does not throw anything away, and this phrase is well known in the gastronomic tradition of the provinces of Cremona and Mantua: you may think to the secular history of this animal, which has always been handed down through the generations, from father to son, from animal breeding to the long and complex processing of its meat. 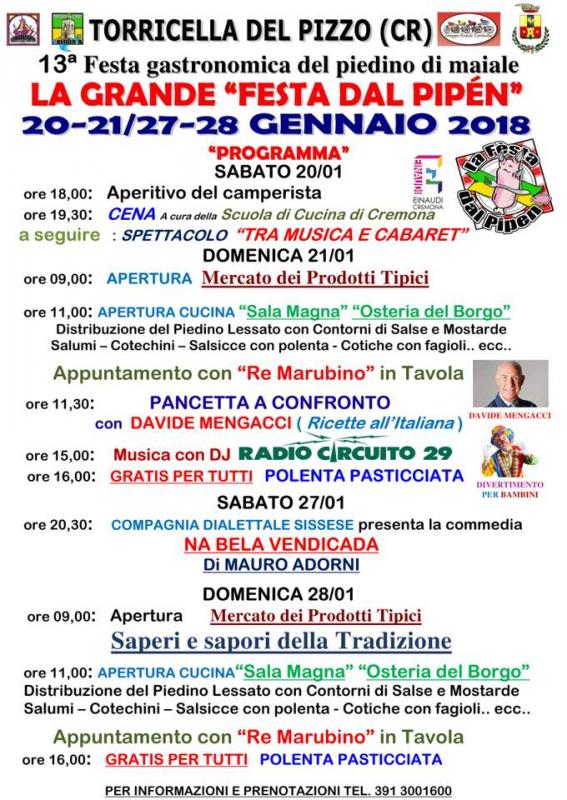 The appointment to all those who wish to discover the secrets of this fascinating world is for the weekend of January 20th and 21st, in Torricella del Pizzo, a few kilometers from our structure.

Let’s start Saturday 20th from 6.00 pm with the dinner, and then on Sunday 21st from 9.00 am, when the stands of the Typical Products Market will open, followed by the opening of the kitchen with distribution of the characteristic products of the exhibition.

We remind you in particular on Sunday 21st, at the Torretta FarmHouse in Torricella, you will can look live to the processing of the pig in all its phases, starting from 9.00 am until 4.00 pm.

Last day of fair will be Sunday, January 28th, as always with Typical Products Market “Knowledge and flavors of tradition”  followed by the open of kitchen with typical products.